Having fished the koura pattern for a little over a season there was something slightly wrong about the pattern. It did not always ride point up when tied on a straight shank hook with a tungsten bead head.

Whether this is rational or not I am not sure. What I am sure of is when I set out to tie the perfect Koura Fly it had a number of parameters. This started with a fly that moved like a Koura as the most important part of the design. The fly had to be tied in under 2 minutes, and it had to be easy to cast. This overlooked having the hook point riding point up, which is pretty obvious when I thought about it.

Deciding against dumbbell eyes made me search for other options to get the fly to ride point up and still be very quick to tie. I considered a lead keel strapped to the underside of the hook, but this takes too long to tie.

I took a break from tying Koura for a few months, and during that time discovered the Instajig, a Hareline product that turned my favourite Kamasan B200 into a jig hook. I bought thirty of these in 3.3mm or 1/8’ to test.

While the Instajig is a good product it is not something I will be using on the Koura fly in the future because it takes too long to tie the jig onto the fly, and unless securely tied down and glued the bead can turn on the hook. This all adds unnecessary tying time, as well as some frustration while tying so the Instajig experiment was a failure.

This led to the conclusion that it was only a jig hook and a slotted tungsten bead that would get the hook point riding up and be quick and easy to tie. The issue with jig hooks as most of them are short shank, and light wire. I wanted an extra heavy wire gauge and a long shank, so spent a fair bit of time looking for hooks that fitted these criteria.

Jig hooks, with a slotted Tungsten bead was the preferable option. 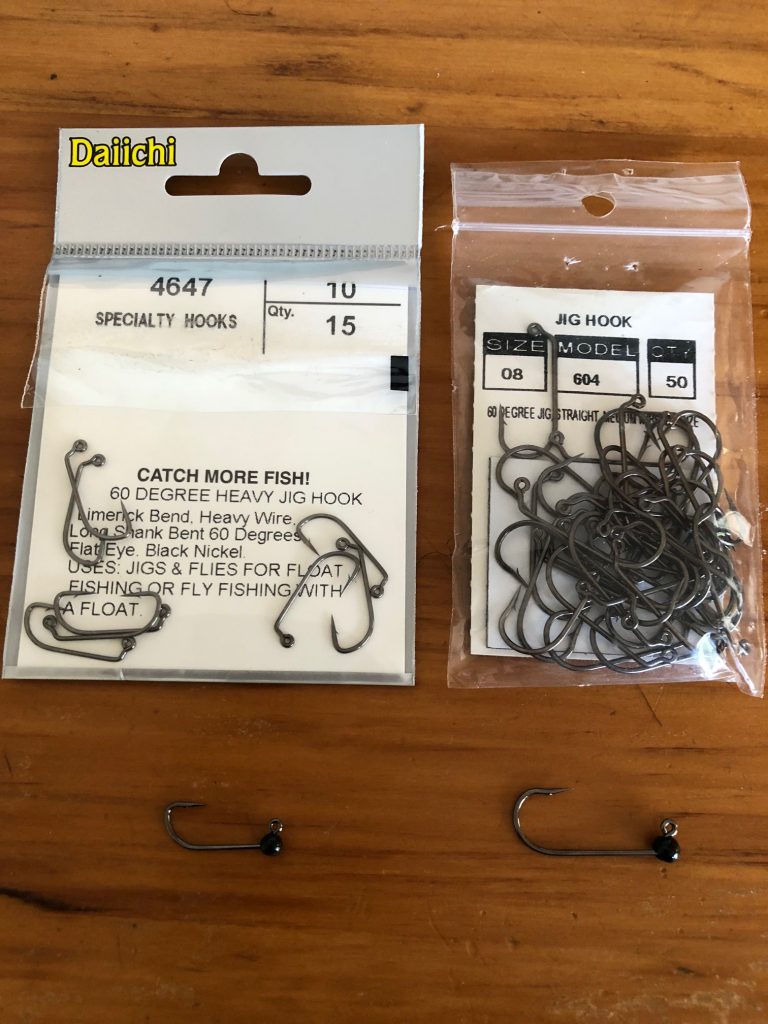 The issue with tying a fly that requires a long body like a Koura on a jig hook is most jig hooks are small. My minimum size koura is a 10 long shank hook, and the options for 10 Long Shank jig hooks are few.

I bought a range of jig hooks to experiment with, as the table below shows:

The hooks I had been using for Koura until I decided on going for a hook point up fly were Kamasan B200s in #10 & #6. This is a hook I have used a lot and it is incredibly strong, so strong I can never recall it opening up on the fly.

The jig hooks I bought had to be heavy or extra heavy wire. The fish I catch on the Koura would average 4lb and are taken exceptionally aggressively. Fine wire opens up, so could not be used.

I bought a cross section of jig hooks. None were absolutely perfect, but all were adequate. The problem was the length of the shank not being long enough.

Koura flies tied on a Daiichi 4647 #10 and a J Stockard 604 #8. Note the claws are still slicked down with water used to measure them when tying in.

The jig hooks all produce reasonable flies. The shorter ones are a little harder to tie on, so I would love to be able to get a slightly longer hook that matches the Kamasan B200 for the size 10 flies. The J Stockard hook is pretty solid in the larger sizes, but as they warn “These hooks run large compared to other jig hooks. Use our image with the scale to select your size.”

The #10 has a 3.5mm black slotted tungsten bead, which is about the right weight to make it castable and get it to the bottom very quickly. It is rare to get a fish taking if the fly is not on the bottom, or near the bottom when they first see it.

The #8 has a 4mm or a 4.5mm black slotted tungsten bead, which adds a little weight to compensate for the extra bulk of the bigger fly.