On a trip to Waikaremoana I lost my Simms Retractor and my nippers, probably as I bush bashed to get down to a river to fish the rise just on dark.

I forgot to replace it, and on my next trip out continually reached for it in an automatic response to trimming line ends. This was a little disconcerting but did demonstrate the importance of nippers and a retractor.

The Simms Retractor is my favourite retractor system. As I fish with a waist pack not a vest the Retractor needs to sit laterally so the nippers don’t swing beneath the pack hitting me on the arse. This is what happened to me when I tried the Fishpond Swivel Retractor, which was so annoying I gave it away and got another Simms Retractor. If I were using a vest I would probably go for the Fishpond product because I am tough on gear and it is more durable than the Simms.

I have now owned three Simms Retractors, having lost two. The first one I lost when the pin lock rotated open without me noticing it, after having done the same thing previously when I had noticed it so hadn’t lost it.

The second one was bashed off, and it had already been repaired from where the pin had come away from the plastic due to getting bashed around over many seasons. To stop me from losing the second retractor I had tied the locking mechanism closed with some 10lb leader. I had also glued the pin to the plastic with some epoxy. 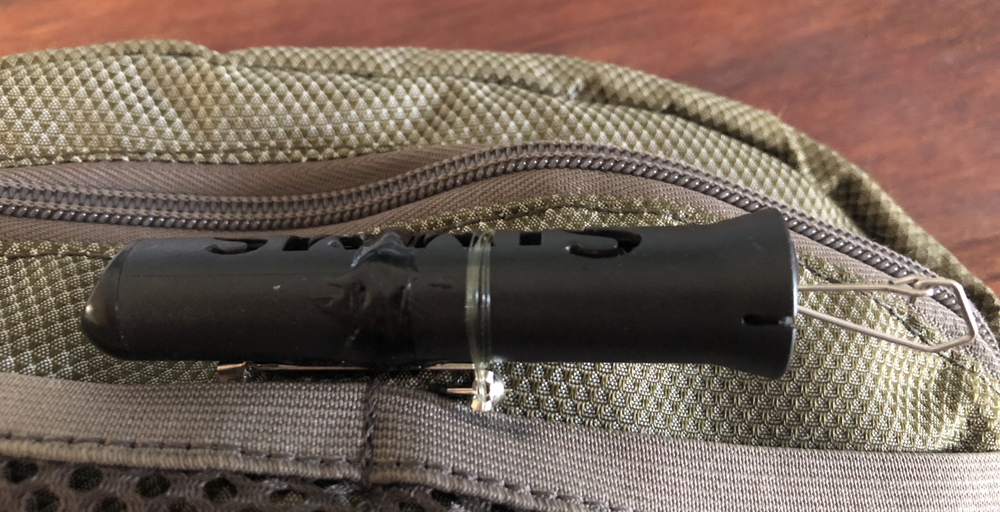 To prevent the Retractor from coming off my waist pack I have wrapped the pin with tying thread and epoxied the metal base of the pin to the plastic. I have repeated my leader through the locking mechanism to prevent it opening of its own accord.