Scott’s G series fly rods have always been my favourite rod for people who do not fish a lot, or are not that good or experienced fishermen.

There are many reasons for the Scott G Series being my favourite rod with the most important being how incredibly easy it is to fish. The G series allows a poor caster to cast well, to cast accurately and to concentrate on presentation rather than casting. This improves their all round fish catching ability, and enjoyment on the water.

The reason Scott’s G Series, the original G, the G2 and the new G are all such good rods to fish is they have a nice medium or slow action that does not require great casting technique to cast really well. I have seen a number of anglers turn from being average to being competent simply because Ihave got them a G series. 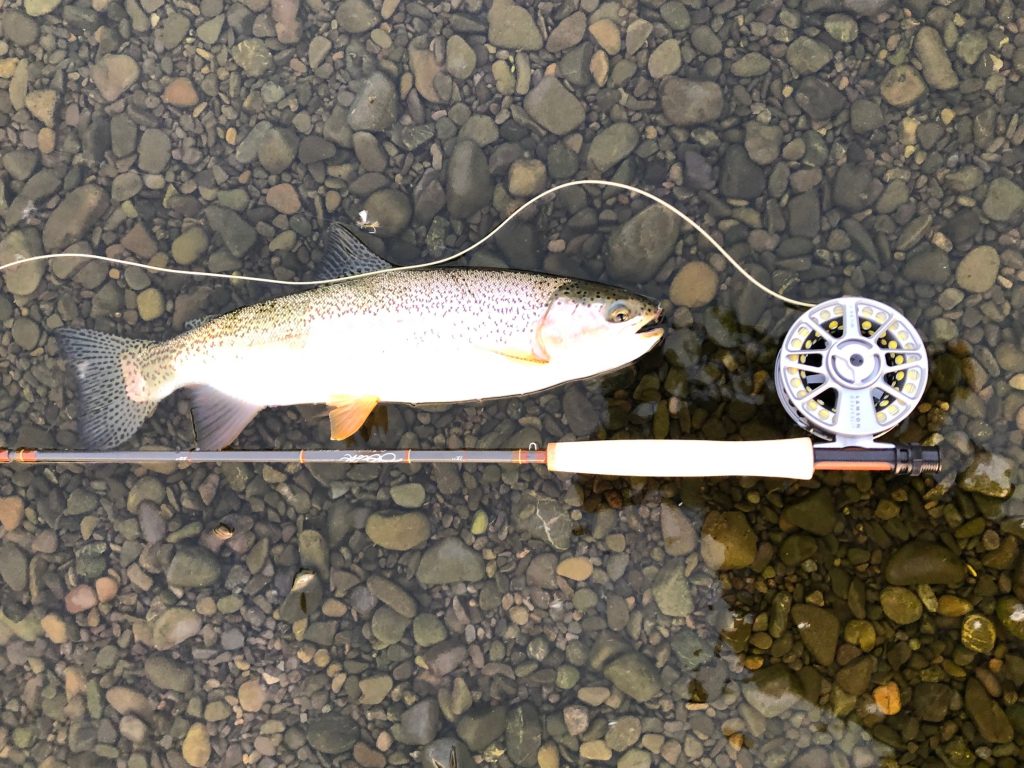 A nice rainbow that took an emerger while fishing the evening rise. The G Series is wonderful on the take, so expect to hook up more consistently using a Scott G.

The softer rod action is not just easy to cast. It is easy to be very accurate with. It is easy on the take so you do not have to have perfect timing as you do with a fast rod. As I have mentioned elsewhere I have a real preference for soft action rods for these reasons.

My fishing experience has been almost exclusively sight fishing where accuracy is the difference between being successful and not being successful. A rod that allows infrequent, beginner or poor anglers to cast accurately dramatically increases the number of fish they can catch.

Equally importantly a softer rod casts short distances effectively. Most of the fish I catch are close to me, and a 40ft cast is one of my most common casts. A stiffer rod is harder to cast short distances, and harder to be accurate with.

The Scott G Series 8ft 8 inch 6wt I set up for a mate casts beautifully. It is good on the take and it is easy to use. If you are an experienced angler who uses fast rods you may need to slow your cast down to really get the Scott working properly, but you will be surprised at the accuracy and the conversion rate on takes compared to faster rods.

If you are after one rod that will fish in just about all situations you will encounter in New Zealand the Scott G Series 6wt is the rod you should get. It is easy to use, very accurate and can cast most ranges.