Long leaders are important for the kind of fishing I do, which is casting to large sighted fish in New Zealand lakes and rivers. The water is clear and the fish will almost always be quite wary. A long leader is pretty crucial to increasing catch rates, especially of browns.

I use five weight rods exclusively, with two different leader set ups. One is a simple level 5lb leader of 9ft, and the other is a 20ft leader starting with an Airflo 10ft Floating Polyleader. Over the years I have refined my long leader, and this arrticle is an explanation of what has worked for me. 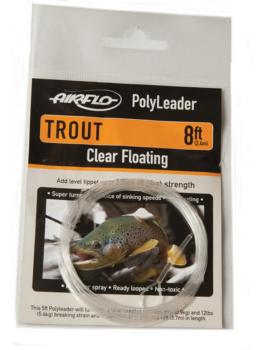 Airflo Polyleaders come in 5,8 & 10ft and a variety of densities.

As with everything I write I encourage you to use the parts of what I have written that work for you, rather than copying everything perfectly. Different rods, lines and technique will produce different results, so anglers should use this is as guide, rather than copy it exactly.

Perhaps the most important part of setting up a long leader is to practice with it with a variety of different flies. Test different lengths of each section of the leader, and work out what casts best for you and with your flies.

Some years ago I spend time reading up on the theory of building my own tapered leaders, because I have never really liked the idea of buying tapered leaders from a store.

There are a number of formulae for setting up leaders, and I spent a fair bit of time reading up on them. My conclusion at the end of this reading and having built a few leaders was that the theory provided a very useful starting point. The variables of the rod, fly line and leader used meant that anything too prescriptive was likely to be able to be improved on with trial and error.

I spent a fair bit of time testing different leaders, casting them with different flies. As a reference point I cast with my eyes closed, as this means you have to feel the line turn.

Principles of a Taper Leader

My understanding of physics is pretty basic. I have forgotten most of what I was taught at school. What I did remember is that the transfer of energy works best when materials are of similar density. This is why leaders need to taper down from a thick butt section to the tippet.

Transfer of energy through poor quality connections is poor. This means doing away with all loop to loop connections, as they do not transfer energy effectively.

To create a good transfer of energy I start with an Airflo Floating 10ft Polyleader. If you have not used one of these they taper down nicely from something close to the thickness of a fly line to something similar to 10lb nylon. Set up correctly they provide a far more consistent cast than attempting to make a 20 ft leader with only nylon or fluorocarbon.

Polyleaders usually come with a loop that can be looped to the loop of the fly line, but this does not give a particularly good transfer of energy, so it is harder to cast quickly and accurately. While it does provide advantages in being able to change leaders easily I prefer to have two spools for all my reels and set up one long and one short leader.

To join a polyleader to a fly line you will need: 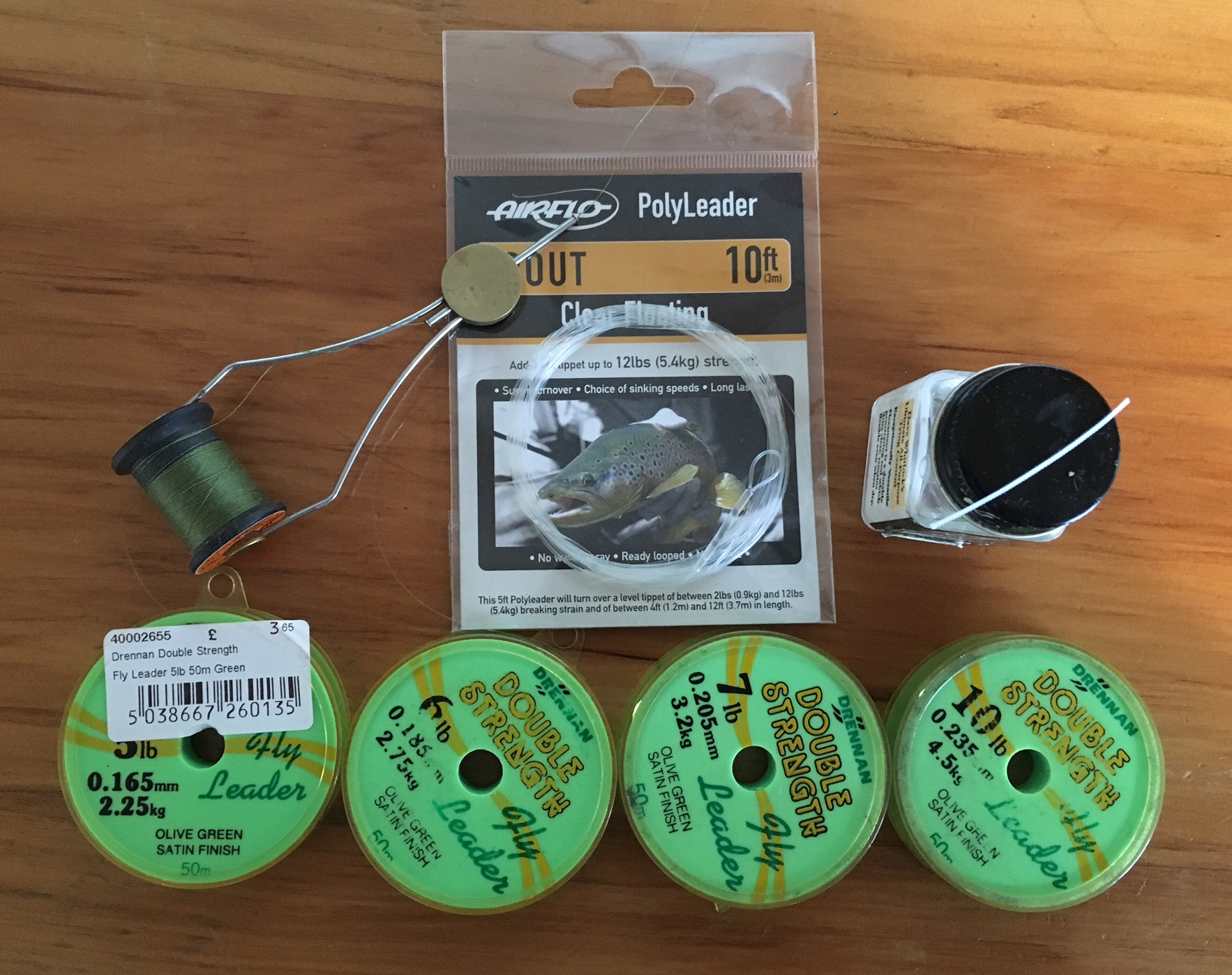 Building the rest of the Leader

For those who are interested there are many, many formulae online for tying tapered leaders. These can be useful or they can be unnecessarily complex. I found them useful for background information but was not as good as trial and error when it comes to building leaders.

I use Drennan Double Strength 10lb, 7lb, 6lb and 5lb line to build my leaders. Note that you need to step down the diameter of the leader gradually or the knots will break and the transfer of energy will be poor.

The middle sections are the crucial sections. Even 50 mm too much of either the 6 or 7lb leader will dramatically affect the cast. I start with 300mm of each, and reduce them down if the flies are not turning properly. Remember when you are tying these sections to include line that you will lose when you tie the knot, which can be as much as 50mm a knot.

The final tippet section is 5lb line, and I will usually start with about 500mm of line. Sometimes this needs to be reduced back, especially if using heavy nymphs. 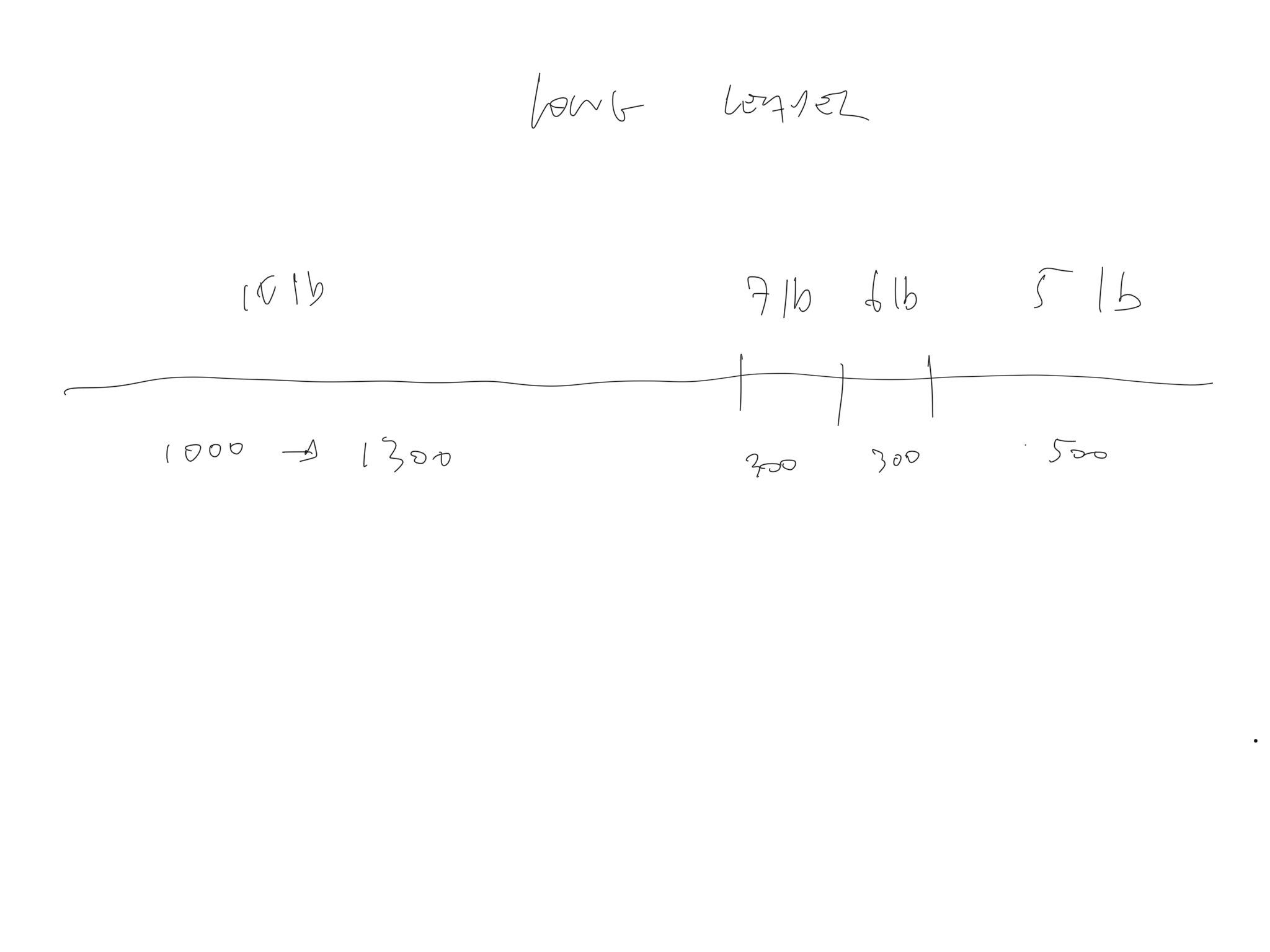 As a minimalist fisherman I use very few knots. There are a number of good knots that can be used for tying your own tapered leader, so if you have a knot you trust use that. My preference is for a Blood Knot, which I find easy to tie and have had plenty of success with over many seasons fishing.

A good tapered leader will cast beautifully. If your leader does not enable you to cast as well as you usually can it is likely to be a poor leader set up rather than poor technique.

Trial and error will help fix a leader that does not turn properly. My experience has been that the crucial sections are the two middle sections, the 6lb & 7lb. If they are more than 300mm they seem to create an inconsistent transfer of energy and the cast lacks accuracy. Reduce them down to under 30mm and the leader turns very nicely.

Fishing a long leader to a fish subsurface. This video shows the importance of getting the long leader out before making a cast.

You may need to fine tune your leader if you are casting heavier than normal nymphs. Consider shortening all sections of your leader, starting with the middle sections, if your cast is not smooth.

I’ve also found that fishing tungsten bead nymphs under a dry fly can mess up my cast. The tungsten is very heavy and changes the feel of the cast, and can make the cast clumsy. Reducing the distance between the dry and the nymph will deal with this. The other option is to use a smaller tungsten bead or a copper bead, reducing the weight of the nymph.

Long leaders do not work well with soft action rods so I only use the long leader with my Scott Radian or Sage TCR, but not my soft Scott G Series. The G series simply does not load when using a long leader.

I fish two very different leaders, one level leader less than a rod length of 5lb Drennan Double Strength. This is a leader that is very easy to cast and very accurate, but fish will often see the end of the fly line and spook.