I’ve heard a great deal about Hornady’s range of the new ELD-X® projectiles, but does it match the hype?

Possibly. All I know is that I needed something with a bit more punch than my normal 150gr ballistic tip load as I had the opportunity to hunt wild bulls in Taranaki.

I did a bit of research on hunting these animals and came away with the impression that they are very dangerous, and you need to put the animal down hard and fast. It is said that they will hunt you and not the other way around.

That was certainly my experience, but that is for another article. This one is about the Hornady Precision Hunter .308 178gr ELD-X ammunition I chose for this hunt.

My research suggested a minimum of 180gr for wild bulls. My main hunting rifle is a Tikka T3 in .308 and as I was unlikely to make a habit of hunting wild bulls i decided to go for a box of factory ammunition. The Precision Hunter series seemed to fit the bill, though the recommendation for this round is somewhat shy of weight of wild bulls.

It is rated for Deer and Elk sized animals:

Wild bulls easily weigh well over the upper limit of the .308 178gr projectiles and load.

The land owner recommended head shots only, anything else would annoy the bull and likely end up with the shooter in grave danger. I figured that a 178gr in the right spot just above the eyes should sort it out.

Turns out I was right…though it was somewhat frightening to be with 50 yards of a mean, heavy animal that could move a lot faster and a lot quieter than me in the scrub.

We had watched and stalked this bull for two days and we were hoping to catch it on our side of the river in the early morning. We had spied the herd on the other side but we couldn’t find the bull we were after…until we came around a bend on the track and saw his distinctive coat. We quickly moved into the scrub to shield us and stalked a bit closer. We wanted to make sure of this one. He was huge.

I rested my rifle on some manuka and lined up the shot, I had a slight problem though, I could see his head and he was looking at me and bellowing. But I had to shoot between two other manuka branches and I had to wait until the spot i needed to shoot on his forehead came into view…all while he knew we were there and was eyeballing us…less than 50 yds away.

Finally he dipped his head, let out a bellow and slowly raised it and the spot was in the clear. I took the shot and the Precision Hunter ELD-X bullet smacked him just above the eyes. He went down hard, then rolled off the bank he was on and came to rest on a nice slope where it would be easier to head skin and butcher him. 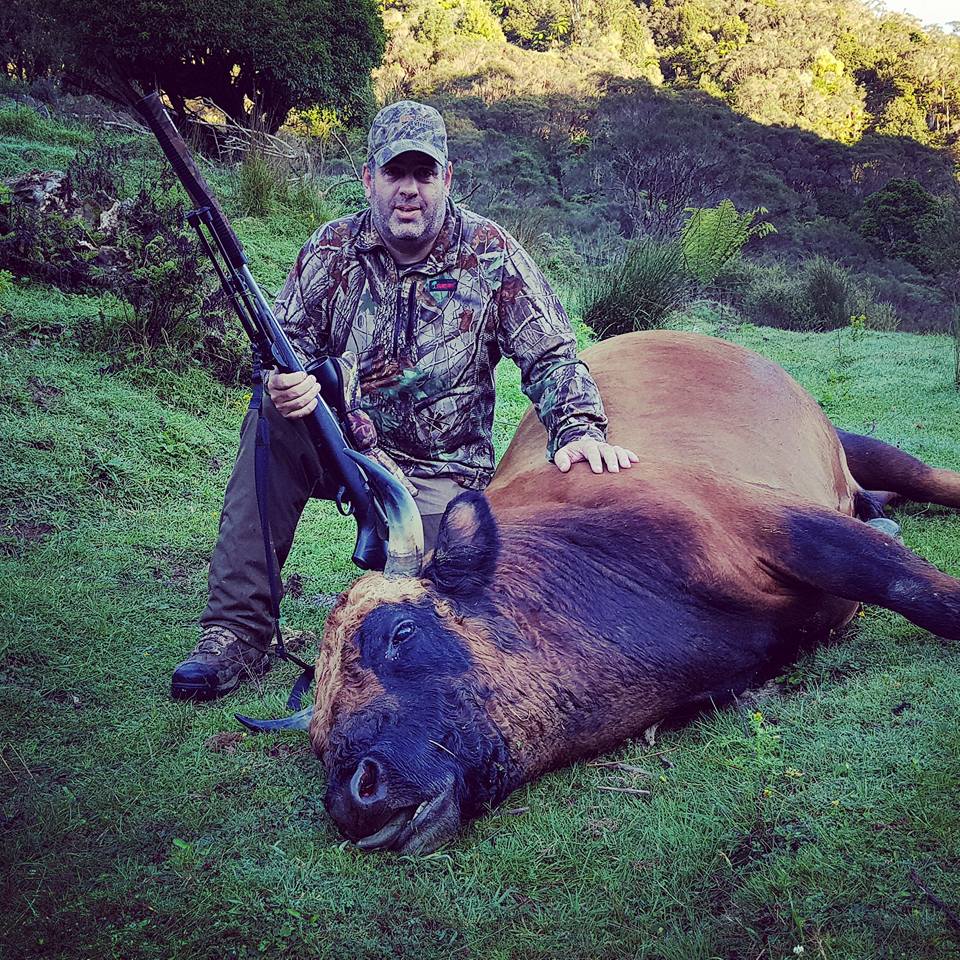 The 178gr ELD-X bullet had penetrated the skull and killed the bull instantly. I am pretty sure it never exited and so dumped all of its energy into the skull of this massive animal. One shot was all it needed.

I still have the remainder of the box, so I will have to try this round out over longer distances. One thing I do know is that if it will kill a two tonne bull, anything smaller than that is definitely going to tip over.

Featuring the radically superior ELD-­X® bullet with Heat Shield® tip, Precision Hunter™ is the ideal load for ANY hunting situation because of its effective terminal performance at ALL practical ranges.

Verified by Doppler radar, the Heat Shield® tip defies the effects of aerodynamic heating and retains its shape to maintain the highest-in­-class BC over its entire trajectory.

With high velocity, 0-­400 yard impact, the bullet continually expands throughout its penetration path. The thick shank of the jacket and high InterLock® ring keep the core and jacket together providing 50­-60% weight retention.