I use three fly rods for trout, all five weights. Each has a slightly different purpose, and has strengths and weaknesses that make them good in different situations. They all have different actions, and this is what makes them different.

The old Scott G Series six weight was my favourite rod of all time until it was replaced by the G2 Series, which was then replaced by a new G series. The six weight would be the rod I would use if I were to only fish one rod as it can cope with long leaders, heavy flies, short casts and is good for striking and fighting fish. The new G Series is even better than the G2 series, as it is a bit stronger on the cast without losing any of its feel, accuracy or castability.

I use a five weight, rather than a six weight, as it is slightly more accurate, and while the six weight G series is a great all round rod, it is not as good as the three five weights I use for specific tasks.

The G2 Series may be found here. 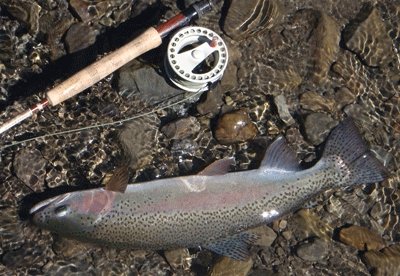 A mending jack taken on the G Series

Action:                Soft (Scott describe the action as “Flex Profile Medium”). A soft action rod flexes right through the rod, rather than just in the tip section.

What it is good at:       Short Casts, striking, playing fish, casting

What I use it for:        I use this rod when I am fishing to fish on the drop offs on the Tukituki. It is a great rod for casting short distances, and fantastic on the take. I use it for fishing small tight streams in the early season, and if I know I am going to be fishing off the high bank or out of trees as fish swimming directly below you are hard to connect with and this is a very good rod for striking.

Who should use this type of rod:            Soft rods are the ideal choice for the angler that does not fish very often, or is not particularly proficient. They are very easy to cast, and very forgiving of bad casting technique. They are easy to strike with, and very good for fighting fish because their soft action.