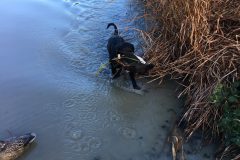 Print
One of the worst meals I have ever cooked was a Paradise Duck Stew when I first started shooting. It was almost too tough to eat but I was too lazy to cook anything else so struggled through it. There was a lot left over. A couple of days later I had an exceptionally busy day and nothing else to eat so I reheated the stew and it was really, really good.

Game birds are tough, a lot tougher than domestic birds, because they use their muscles a lot more. There are a variety of ways that to deal with them to stop them being tough, and you don’t have to be a chef to turn out a decent meal.

The conventional wisdom from England is that birds should be left three weeks hanging in the cellar before being processed. When I was shooting in England this was something of an urban legend, as only one guy I talked to had ever left birds for three weeks and those were birds he had forgotten. They did go green, he did shake them and the feathers fell out, and he reckoned they were the best tasting pheasants he had ever had. There is some truth to the urban legend.

Letting birds settle out in a fridge gives the proteins in the flesh to break down. If you freeze them straight after harvest they will be tough. If you leave them in the fridge and allow the proteins to break down they will be tender. I leave all my birds for two weeks before processing them, and they are much, much more palatable.

I learned from my terrible paradise duck stew that double cooking game also made it a lot more tender. Before I had a slow cooker I double cooked all my stews, whether it be duck, rabbit, hare, or venison. They were always a lot more tender after the second cooking the day after they had been cooked and left to cool down. Even birds I have left to settle out for two weeks will get the double cooking treatment to guarantee they are tender. A slow cooker will have the same effect, as it cooks low and long, which helps tenderise the meat.

You can add all sorts of things to this recipe, including orange juice (pith free as the pith is bitter), wine, spirits, herbs and other vegetables. Just avoid using a tannic red wine as the tannins will turn the stew bitter.

If you don’t want to store birds for two weeks in the fridge, or double cook them, duck soup is a better bet than a stew. Use the recipe above, then blend using a stick blender. This turns the stew in to a very smooth soup so toughness is not an issue. Serve with sour cream and parsley and it will be a very popular soup.